Paris is a city like no other.  The moment I stepped on a sidewalk outside of the Gare du Nord station, it was love.  My journey to Paris started out at Kings Cross St Pancras.  The international side of Kings Cross station.  I took a bullet train from London to Paris, which is a little over two hours on this fast train.  The Chunnel or Channel Tunnel is 50 km, which is roughly 31 miles and at it’s deepest is 75 meters below the sea bed. 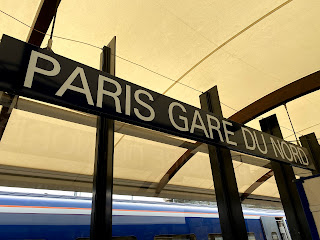 As I was in France, I zoomed past all these little towns with churches and steeples.  The downcast sky from England seemed to follow all the way until the Gare du

While at the Gare du Nord, I had to figure out how to use the metro trains.  Gare du is just French for main line.  While in London, I learned that the easiest way to get around was to ask someone, you tell them where you want to go and then ask which platform you need to get on.  Platforms are very specific.

So I asked around at the international kiosks.  I would learn later that the Gare du were ‘main lines.’  In France, the magic word is ligne or line.  But my main concern was to find the hotel and then get to the Catacombes.  While in the Gare du Nord station, I would be going to the wrong lines.  To get to Meudon, I would need to take a line that was ‘Gare du’ to a the Gare du Meudon station.

I didn’t eat much as I was in a hurry.  The new Travelodge that I stayed at because they were the cheapest rate for the time was in Cricklewood, which is in Northern London.  It would take about twenty minutes to get from the nearest station to Kings Cross.  It would take about twenty minutes to walk from the hotel to that station.  The train leaves at 7:00am and you have to be there a half hour before boarding because it’s an international platform.  I had to get up way early and I took no chances so I got a double espresso after check in and boarded the train.

I arrived at the Gare du Nord at around 10:30 and it took me about 45 minutes to figure out what ligne I need to be on.  I arrived at my hotel in Meudon by around 1:00pm.  I got off at the right station. 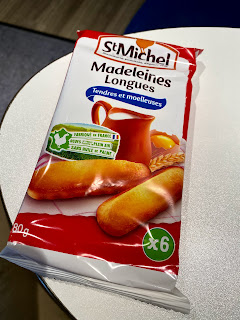 But at the Gare du Meudon station, I didn’t know where to go to get to my hotel.  I googled it, did a snapshot so it was on my phone the night before.  And in the end had to ask people where I needed to go.  So I asked some college aged girls smoking cigarettes on a long stairway.  And as they were giving me directions, this older guy came up and told me where to go.  Once he gave me the directions I thanked him.  After he was out of earshot though, the girls I originally asked for directions, said ‘no, no, no, you just need to go that way one block and then another direction for one block and then the road will take you there.  I grinned and thanked them.

I followed their directions, but still got a little lost.  But I knew that the road my hotel was on was the rue de Paris.  Rue is just French for street or road.  I had to walk around until I saw what they were talking about.  I learned long ago in Japan that it’s a good thing to ask for directions.  So every now and then I would ask for directions.  And get something succinct or something off the wall.

When I finally got to my hotel, a little after one, I was starved.  But I had to get to the Catacombes by three.  So I did a quick shower.  I didn’t want to take any chances so I didn’t try to find a restaurant.  I knew how hard it was to figure out rues and lignes, I knew I had to leave right away.  So I went to the vending machine and saw little cakes called madeleines, which were little twinkies.  Those looked like they would tie me over until whenever, so I scarfed them down and drank orange juice from the vending machine.

My suspicions about navigating were correct.  Even though I saved screenshots of the directions from the hotel to the Catacombes, I had a tough time adjusting to the street system and metro train system.  I asked around some more and the people I talked with pointed in the direction I needed to go to in order to get to the correct train station. 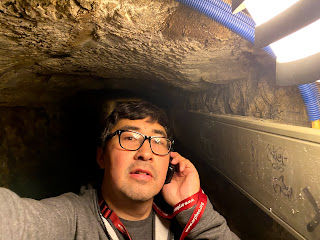 The minor lines, don’t really check for tickets.  It’s like a lot of people get on and get off where they please.  Halfway between Meudon and the Catacombs, the whole metro train system clicked, or enough to where I could navigate around the city better.

I reached the station that I needed to go to and walked out with twelve minutes to spare.  I asked this one girl where I need to go, gave the street name and number.  She pointed across the street and said, you see where that line is, that is where they are.  I smiled the broadest smile ever, I made it with ten minutes to spare.  At the hotel, I gave myself a twenty percent chance that I would find them on time.  I thanked her and darted across the street.

The line went by quickly and in little time I was in the Catacombes.  I had my little radio.  I followed the tunnel.  The moment I stepped into the Catacombes, I could feel the hair prickle on my neck.  I never imagined they would affect me as they did. 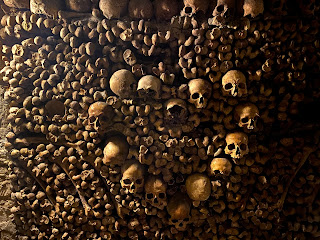 It was dark, it was damp.  There were bones everywhere.  There was a guy explaining to a girl on how to use her Canon SLR.  He was telling her tips on photography.  Stuff I already knew.  It made me smile. 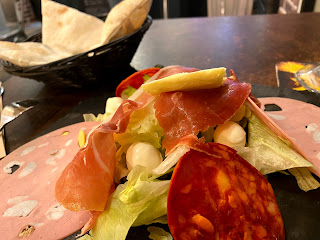 On the tour, once you see a number, you’re supposed to hit that number on your radio.  I hit about every other number.  The radio explained about different things in the Catacombes, gave a little history and background.  Stuff, I mostly forgot.  But it was an opportunity to take pictures.  Now I didn’t have the foresight to get a strap for my Fujifilm camera, so I didn’t take it with me.  I worried that it could easily get stolen while I was trying to figure stuff out.  So I used my iPhone.  I’m happy with the pictures I took. 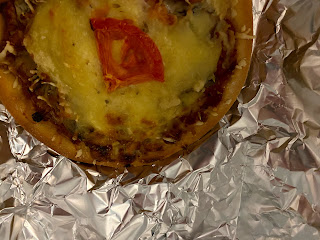 After that I easily found my way back to Meudon.  I walked around looking for a restaurant.  I found a pub that had a menu on it.  I went in and found out that they wouldn’t serve food until like seven.  Out of courtesy, I ordered a beer.  I walked around the neighborhood looking for a place to eat.  I was in Meudon by around five.  I found another place and they said they wouldn’t serve food until six.  It was around five thirty.  I ordered another beer, which, at this time was torture.  I am really hungry.  I don’t want to drink beer or wine.  I want to eat.  So I order a sour beer and then some Charcuterie for 9 Euro.  Then I walked to a bakery and ordered a Croque Monsieur pastry which was more like a pizza than the actual sandwich.

On my way home, I stopped at the pharmacy because at this time I was feeling a little pain from all the walking I was doing.  After enough conversation, I ended up getting aspirin.  It was dissolvable aspirin and the pharmacist recommended that I eat something.  Compare to what I take daily for joint pain, this aspirin was a little on the weak side, but it dulled the pain enough.  I thanked her for the help and made my way to the hotel.

It was only 7:30pm, but it was dark out.  I was supremely tired.  I ate my pastry and took my aspirin and watched the French version of the masked singer until I feel asleep. 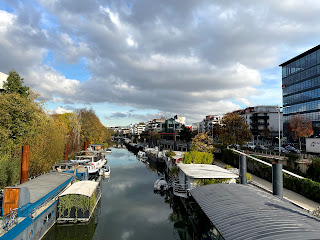