9 November, Paris.  This was the big day.  I wanted to go to London and Paris.  The idea of the trip was from watching a Youtube clip of a-ha announcing they are going on tour that year.  The first thing I bought were the tickets to London.  Then I bought a ticket to the concert.  I planned the trip and bought each little thing piece by piece.  I paid for certain hotels on one paycheck and other hotels on another paycheck.

It was just, I had a mishap on the very first night in London.  What I thought was a bed and breakfast turned out to be something different and the guy who ran the place I was to lodge at said that he doesn’t lodge people anymore.  I was fine, I survived.  But while in London, I began to doubt things.  I would ask myself what am I doing here?  Am I really going to Paris?  If I am, how much more debt will I incur, little 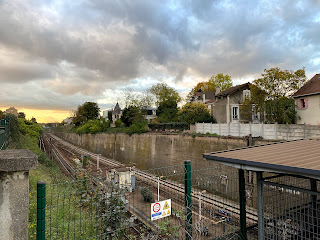 I had already paid for the train tickets and the hotel, as if anything could I change anything.  Fortunately for me, the place I stayed at in Meudon was the hotel Ibis, an actual hotel chain.  I saw one in Cambridge.  My mind was set at ease.  I put more planning into my two days in Paris, than I did for the whole trip.