I figured I would get some rest before the concert.  But for some reason, I thought I should break the Euro that I had to smaller bills in 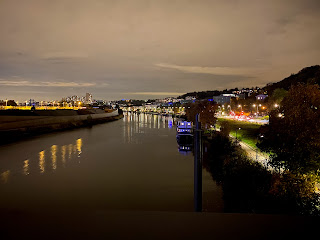 case I need to get a ticket for the ride back to the hotel.  So I walked around and found the shopping center.  There grocery store was two levels of the building it was in.  I bought a pint bottle of a sour beer, a package of grapes and a chocolate.

I was getting hungry and didn’t want look real hard for something else to eat.  I went to McDonalds and ordered an Egg McMuffin.  The high school girl noticed I wasn’t a French speaker, so she helped me with my order and it gave her a chance to practice her English.  I think she was throwing insults at me in French, because she said something and her friends laughed.  It really didn’t bother me, the conversation in English was pleasant enough.  As with all the people I spoke with in France, I thanked them very much in French.  Merci Beaucoup.

When I got back to the hotel from that little excursion, I was at 22,000 steps.  I wolfed down the McMuffin and chomped on the grapes and noticed something odd with the grapes.  They had seeds in them.  Large ones.  I’m not really supposed to eat seeds.  I did anyways.

Seven o’clock comes by and I walk to the station of the smaller railway line.  It’s a five minute ride to stop for the music hall.  From that 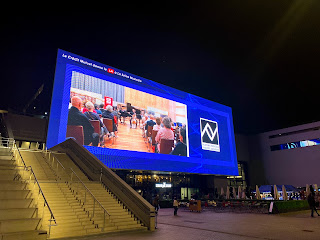 little station, it was a five minute walk in the rain.

A-ha was the best concert I ever went to in my life.  There was a four minute animated video, about a guy going on a train.  Then when they got on stage, they played their whole first album in the exact order of the album.  When they finished, they walked off stage.  The lady who sat next to me left.  I walked around, but it didn’t look like anyone was actually leaving the music hall.  I walked back to my section and saw on the screen a countdown of sorts.  I asked an attendant, if there was more to the show and she said yes.  I went back to my seat.

They came back on stage and played a few songs from other albums of theirs.  One song was a hard rock song, it was a bit edgier than anything I had heard of them before.  The keyboardist talked to the audience in English and apologized that he couldn’t speak more than a couple of phrases in French.  He said that we the music lovers made all this possible and wanted to humbly thank us.

For the encore song, they played The Living Daylights, which was a song they wrote for the James Bond movie of the same name.

I walked back to the station in the rain.  I didn’t care, I was happy.  This whole day was a very happy day.  I was so happy to be alive.  I was so happy to walk along the Seine.  I enjoyed listening to other concert goings talking passionately in French about the concert and me, not knowing what they were saying.  My feet hurt, but it was a good trade off.  I got back to the hotel, drank my sour beer and just gleamed in happiness and love for a moment.  And then I went to bed. 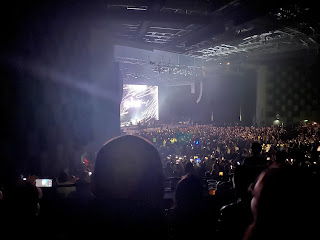 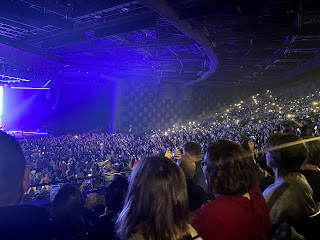 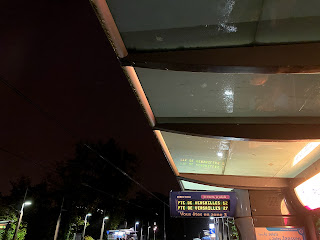