It is said that, if you were to gaze at each piece of art or artifact for ten seconds, it would take at least a week at the museum’s hours to view them all.  The Louvre is that large.  Like Paris, there are two ways of taking on the task of enjoying the museum.  One would be to spend days walking from section to section.  Two, get an idea of what you want to see and then go from there.

I took the tour for people who have never seen the Louvre before.  Highly recommended.  Next time, if I go to the Louve with someone who has never been there, I will take the tour.  But I would do some research for what to look for after the tour.  With the tour, they focus on the three masterpieces: the Venus de Milo, the Mona Lisa and the Winged Victory of Samothrace.  The reason I got the tour was because I heard that there is a line for the Mona Lisa that is so long that people wait for an hour to the see the painting.  With the tour, the wait was like ten minutes.  I tried to take as many pictures of all the art possible.  Really, there wasn’t much time.  Going back it would be a full day thing.

Of one statue, it was of a naked woman on a bed.  As the curator had us look at one side and said, look what a beautiful woman.  Then she had us walk to show us the other side of the statue.  The woman had a penis.  She laughed and then told us the story of Hermaphrodite, the son of Aphrodite and Hermes, who rejected Salmacis, who in turned cursed him to have both male and female parts.

After the tour was done, I walked around the Louvre with no idea of what else I wanted to see.  I walked around aimlessly.  After a while, I was hungry again and went to the vendor inside the museum and ordered a ham and cheese baguette and a coke.

Baguettes in London, for me were a staple.  The baguette I had at the Louvre was far different.  It was crisper and took me a while longer to eat.  So I was forced to slow down with my meal.  But the coke was real.  In London, or England for that matter, any time you order a coke, you get a coke zero.  But this was in a can, so I could enjoy a real coke.

Outside of the Louve, I walked around the museum itself.  It’s like a horseshoe but each end is at least as long as a football field.  The middle is just as long as a football field as well.  And yet, I have a feeling that it was even larger than that because I couldn’t really grasp the spacial dimensions.  Let’s just say it was large.  On one of the courtyards, there was a band playing.  Unlike the bands playing at King’s Cross, this band had wind instruments and they were playing a march.  It was really old country, versus King’s Cross bands playing punk rock.

Now there is a train line that hits up most of the tourist attractions.  I had so many places I wanted to see.  But Paris is large and I had already walked 12,000 steps at the Lourve alone.

I took the train back to my hotel. 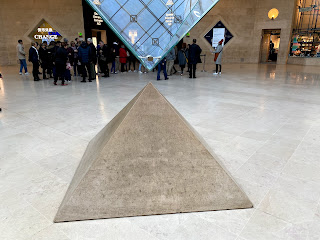 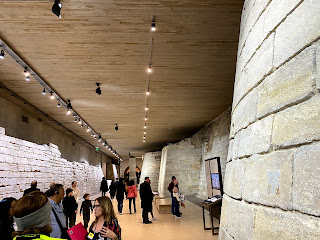 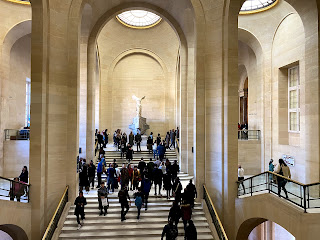 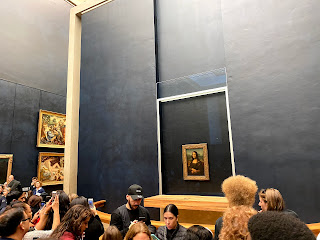 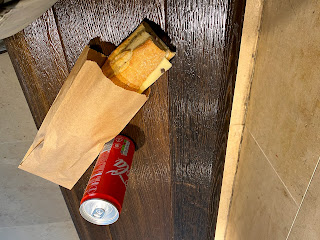