Five rich men are bored with life and are in a club to witness death. When they make a deal with the Grimm Reaper, they find out how entertaining death can be. 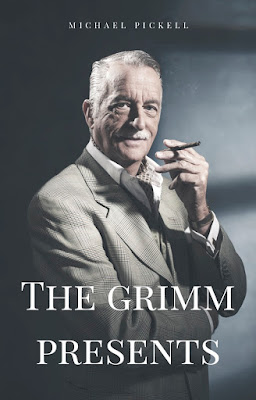 Song mood: Mysterious Ways by U2. Currently I’m listening to The Ruin by Dervla McTiernan.  I’ve listened to a couple of novellas that she wrote where her detective Cormac Reilly briefly shows up in and liked them.  This is the first book with her star detective.  Between McTiernan and Trevor on who writes better suspense, I would say hands down McTiernan.   A person who writes mysteries as a genre follow a set of conventions so that the reader isn’t in a state of confusion.  One great example is putting dates before each section or series of sections.  Literary writers don’t follow conventions and the confusion at times come from the writing.  Where I say, let the characters mislead the reader not the writing itself. I am enjoying The Ruin .  It’s nice to get back to a solid mystery. I continue to walk at the lake.  Although, it’s a modified path where I get around 2.5 miles instead 4 miles.  I still need to figure out what to do for exercise in the winter.  I want to get a rowing m
2 comments
Read more

Song mood: In Too Deep by Genesis. It’s been an Inspector Morse weekend.  I’m halfway through the original series.  I think I came upon an understanding.  If the show follows the book closely, it will say based on the book.  After the second season, the shows stopped following the books closely and then it says based off the characters.  Some of them say based off an idea by the author, which would indicate that the author collaborated with the producers for the screenplay. The other thing that I realized is that if they are going to follow the series, Chief Inspector Thursday won’t be in the new show for much longer.  Which this last season hinted at. I expect to work on my own mystery this week.  It happens in Sandy, England.  My Inspector Trevor is surnamed after the Irish author, William Trevor.   Trevor is one of the biggest names in literature.  Or he was when I attended college for Creative Writing.  I’ve read a few of his short stories.  I think I should listen to a fe
Post a Comment
Read more

Song mood: Zoo Station by U2.  Although I’m not sure I’m ready for anything. Goal for the week is to finish the second draft.  Then to both start the next book and to edit.  A tool that I picked up from one of my writer friends is https://relatedwords.org .  Kind of like a thesaurus but possibly better. I still haven’t figured out what I am doing for August poems.  So far the museums are not opening up.  The only one I found that was openning next week was in Hastings, NE.  And that one is a science museum.  What I need is someone who is good as a writing exercise list generator.  Or someone who could come up with a writing exercise task.  Who could come up with an easy to do poetry theme for a month.  I need a writing partner.  Well, I need a partner.  A partner in crime possibly? I still haven’t figured out my camera.  I’m still behind on French.  I want to be ready by the next time I go. I still haven’t figured out a lot of things.  I will go back to the small portions mult
Post a Comment
Read more